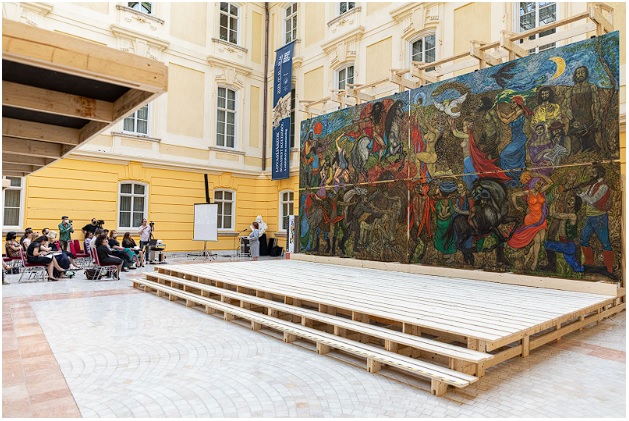 Exhibition took place between June and September 2021 in the Budapest History Museum, in the framework of the Off-Biennale, being the largest independent arts initiative in Hungary. This exhibition was ground-breaking for multiple reasons: on the one hand, Roma art is rarely represented in such prestigious public institutions in Hungary and on the other, this specific painting has been invisible now for several years. Up to today, the Hungarian museological sphere and cultural context did not have a solid practice in organizing collaborative cultural projects. Participation of different actors in such large public museums is quite rare, mostly because besides the OFF-Biennale Association and the Budapest History Museum, three independent curators and a large pool of Roma and non-Roma expert, international and Hungarian associations, stakeholders (civil actors, art historians, artists, former friends and colleagues of the painter, social workers) were involved in order to create a dialogical process and a discursive exhibition space where knowledge is created from various different angles. Tamás Péli, being a typical and atypical figure of the Roma art scene and intelligentsia, was born in a low-class musician family in the 8th district of Budapest and contrary to many of his self-taught fellow-artists, he studied as a mural artist at the Royal Dutch Academy of Fine Arts between 1968 and 1973. After returning to Hungary, with a strong and concrete ambition to become a European, Hungarian-Roma artist, Péli painted a 42m²-big panel for a state orphanage, located in the north-eastern part of Hungary, in Tiszadob, in the Andrássy Castle. As in general in the state orphanages, there was a great number of Roma children in Tiszadob so the painting had an identity-building function as well and served as an educative tool that talked about the ethnogenesis of the Roma people, with Kali goddess and the Manush, the first baby / man. The placement of the painting in the community space of the orphanage brings us back to the already mentioned lack of proper Roma cultural institutions or museums – the Birth-panel is not the only painting which was or is exhibited in a community space instead of an art space.