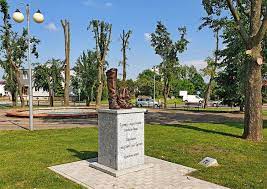 There are two monuments in the centre on the square. The first commemorates a historical event: the proclamation of the Tyszowce Confederation in 1655 during the war with the Swedes. This event belongs to the ‚great history‘, i.e. national history, but it is not so image-bearing as to be an important element on which to build an identity narrative. The second monument depicts a pair of shoes, the so-called tyszowiaki, after the name of the town. Well, until the 1950s, Tyszowce was a well-known centre in the region for the artisan production of shoes, and it is fair to believe that in the colloquial perception it was recognised precisely because of the shoes, rather than a historical event belonging to ‚scholarly‘ rather than colloquial knowledge. Erected in 2010, the monument is a testimony to the search for a heritage that can constitute a local identity and, above all, the recognition of a place. One could say that in the absence of an obvious heritage, local actors try to capture anything around which a narrative of uniqueness can be spun. 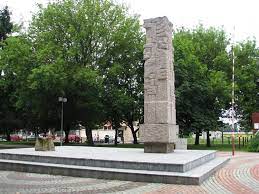 In Poland, the most important institutions creating identity narratives at the local level are the Roman Catholic church and the school, which is heavily influenced by the ruling party and, especially in small towns, the church. The church is the most important transmitter of the nationalist narrative, of which photos 2 and 3 are excellent illustrations. The first shows a display on a church fence, creating a one-sided and manipulated legend of paramilitary units fighting against communist rule after 1945; it should be added that these units were often bandit-like in nature and used strong nationalist rhetoric often measured against Jews and Orthodox. The second photo shows a monument, located in front of the church, which bears the phrase ‚God Honour Fatherland‘, establishing a catalogue of national-Catholic values and commemorating right-wing partisan units from the Second World War. In the absence of a strong local tradition, the influence of the general heritage, imposed by central, national institutions, is of particular importance in the creation of a ‚festive‘, high tradition, and in establishing a language of tradition that local people can use especially in the absence of a clear tradition of their own.